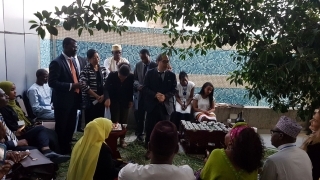 Mr. Morimoto's participation
February 17-21, 2020
Japan funded Training Program to Enhance Conflict Prevention and Peacemaking in the Central African Region was organized by UNITAR (United Nations Institute of Training and Research) in Addis Ababa, Ethiopia.
This is the first training programme for French  speaking African countries, and was attended by officials of Ministries of Foreign Affairs, as well as other key governmental organizations of these countries. The programme was also attended by staff of the African Union Commission, members of AU organizations including FemWise Africa, missions of the United Nations, as well as executives of NGOs working on conflict prevention and peacemaking in Africa.
At the first day of the training, Ambassador of Japan to the African Union, H.E Amb. SHIMIZU Fumio gave an opening remarks and at the last day, a closing remarks was made by Deputy Head of the Mission, Mr. MORIMOTO Masaki. Both representatives of the Mission, during their remarks, explained Japanese cooperation on conflict prevention and peace consolidation in Africa in line with New Approach for Peace and Stability in Africa (NAPSA), which was announced by Prime Minister ABE Shinzo on the occasion of the 7th edition of Tokyo International Conference on African Development (TICAD7) in Yokohama in August 2019 and the African Union’s theme of the year 2020 “Silencing the Guns(STG).” 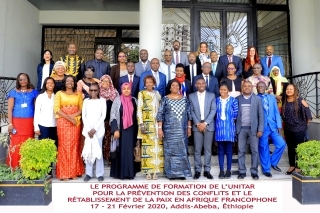