"Japan's Support for the AU Peace and Security" 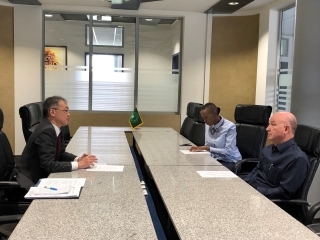 Ambassador Shimizu meets with Commissioner Chergui at the AU Headquarters
On March 18, Ambassador Shimizu met with Ambassador Chergui, Commissioner of Peace and Security at the African Union (AU) headquarters to explain Japan's assistance for peace and stability in Africa through the AU, and exchanged views on the situation of peace and security in Africa including the Sahel region where the deteriorating security situation is concerned.

This assistance will support the African Women's Network for Conflict Prevention and Mediation (FemWise-Africa), as well as disarmament, demobilization, reintegration (DDR) and security sector reform (SSR) in Central Africa and Mali, with the amount of $ 130,128 to the AU Peace Fund from the initial budget of the Japanese government in the fiscal year 2019.

Ambassador Shimizu also highlighted the assistance of Japan to Africa through the supplementary budget of the fiscal year 2019 (approximately $ 24 million for 44 projects in 26 African countries in collaboration with various international organizations). These assistances will implement the “New Approach for Peace and Stability in Africa (NAPSA)” announced by Prime Minister Abe at the TICAD7 held in Yokohama, Japan in August last year. They will also contributes to the realization of the "Silencing the Guns" which is the theme of the AU in 2020.

Commissioner Chergui expressed his gratitude towards Japan's support and stated that he hopes for further cooperation with Japan in promoting peace and stability in Africa.

In response, Ambassador Shimizu stated his hope that the funding be used in appropriate and effective manner to fulfill its purpose.